Skip to content
Home » Contents » How JamboMama! was born – read the story

Please, support our cause! 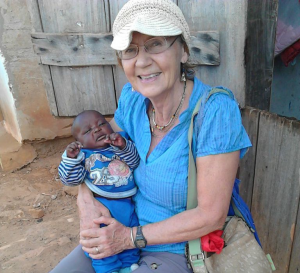 Hello, I am Laetitia, I am a cultural anthropologist by training and I have lived and worked in Africa and Asia for several decades.

Newly married, my husband Jiddo and I went to Congo (DRC) where we volunteered as teachers of English at a teacher training college at Jomba, North Kivu. Our first daughter was born there, in a rural dispensary without electricity. My husband pedaled a bike fixed to the floor that powered the lamp the midwife used to see what she was doing.

We then spent two years in Lesotho, where I did my fieldwork and literature research for my Dutch anthropology degree as well as a few consultancies for development NGOs. Jiddo then joined UNHCR and from then on we traveled from one country to another following his postings.

The first posting with UNHCR was the most amazing and also the most difficult, Somalia (1979). There I discovered the ravages done to very young girls prematurely married to often elderly men. The torture and the permanent damage sexual intercourse did to them, adolescent or even preadolescent girls, excised and infibulated. What excision and infibulation did to women when they had to give birth, the fistulae and suffering it caused.

The living was easy in Senegal where my husband was appointed from 1986-1990. He was then sent to Kinshasa, but that became almost immediately a non-family duty station, so I went back to Europe with the two daughters still at home- the eldest had just joined university in the Netherlands.

From 1998-2002 we lived in Laos, where I enjoyed trekking to remote villages to meet the population there, easily bonding with women. I met many young girls there, most of them married by custom, saying shily to me ‘I am going to die’ meaning ‘I am pregnant’. I also did consultancies for UN organisations, the ADB and AFD. That really started me thinking about maternal mortality in remote regions bereft of any form of modern healthcare. When I had my own first baby, I was too young and ignorant myself to understand the risks of giving birth far from a centre equipped for obstetric emergencies.

During my husband’s postings at UNHCR headquarters in Geneva, I worked with NGOs : for refugees and migrants, for children’s rights, for humanitarian emergencies. On his retirement from UNHCR we stayed on. All three daughters have long since left the house. Pregnancies are a source of joy for them, as they were for me and millions of other women in the world. Anxiety and fear were moments, not the permanent companions of pregnancy.

Since our definitive return in 2003, I have been member of human rights advocacy groups focusing on equitable access to health, working around human rights events and UN organisations in Geneva. I went to Haiti to stay with my husband. This allowed me a brief stint with Handicap International, where I realised how a smooth referral system and better communication at all levels could have vastly improved access to healthcare for all.

Since 2011 I also coach volunteers sent out with a French NGO, DCC (Délégation Catholique pour la Communication). And for over a year now I have been totally absorbed in putting flesh on this idea that women cannot be miserable and lonely and die from pregnancy and childbirth when there are modern electronic hand tools to connect them, to uplift and empower them with information and advice, to keep them out of the danger zone, to bring them to life saving care before it’s too late.

When the idea began to grow, I found app builder Moventes simply by surfing on the web. So I met Pierre-Emmanuel, its founder and engineer. I could not have been luckier. Not only is he an excellent and meticulous IT engineer, Pierre-Emmanuel is also a fresh father himself and still completely enthralled and awed by the miracle and joy of pregnancy and childbirth, and fully aware how dramatically things can go wrong as well.

Our collaboration has been fantastic from the start and it is the reason I believe JamboMama! will change pregnancy and childbirth for rural communities, and that SAHFA’s way of looking at ITC tools for rural communities is the right one. Our inventions are what will make the difference, what will make people left behind in national development enter modernity empowered and confident. 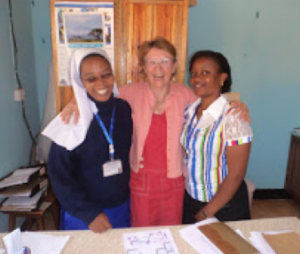 Agreeing that we should connect rural women to health care providers at Rulenge hospital, August 2015

Do you want to
support us?